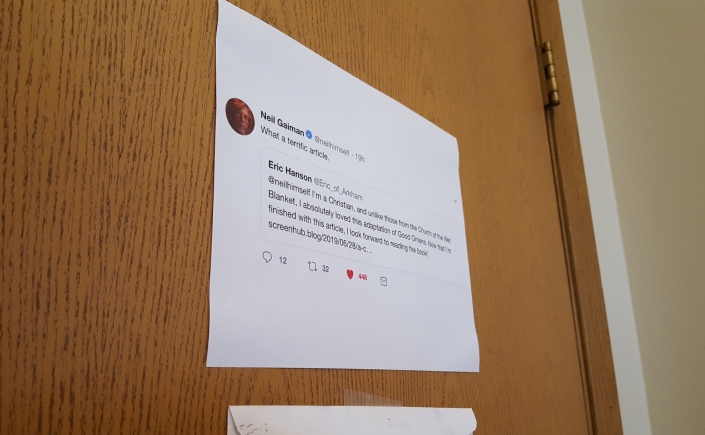 Few artists suffer in solitude quite like writers. While many actors, directors and others struggle to find success in full view of the public, writers often find themselves typing away in a dark, lonely office, hoping that next batch of words might make their dreams come true. In this life, even the smallest affirmation can mean worlds. Last summer, I received such affirmation.

This is my open thank you to Neil Gaiman.

Now you may be wondering just why this wannabe writer is thanking Neil Gaiman. Well, we need a little backstory for that.  My name is Eric Hanson, and my dream is to write professionally. It’s something that already takes up a decent chunk of my time. When not juggling numerous personal projects in both the pipeline and on the backburner, I make extra money covering scripts for International Screenwriter’s Association, and writing for the online magazine ScreenHub Entertainment with my friends.

I must confess to having not read an original Gaiman novel yet, but still consider myself a big fan. StarDust remains one of my favorite fantasy films, and the recent Amazon series Good Omens was some of the most potent and important religious satire I’ve seen in some time. It’s with Good Omens that our little story begins.

I consider myself a Christian. In spite this (or rather because of it), I’m an avid supporter of progressive ideals like LGBTQ rights and environmental preservation. I have quite the dislike for fanatical and hateful ‘Christian’ circles. Being grouped in with such loud mouthed bullies is embarrassing to say the least. So you can imagine I quite like a good bit of religious satire. When done well, it not only ruffles the feathers of Bible Belt Bigots, but it can also balance humor with true Christian values. Good Omens, based on the novel by Neil Gaiman and his close friend Terry Pratchett, encompassed all of these things.

The six part miniseries was overflowing with delightful characters, humor both crude and classy, and more than its share of provocative ideas delivered with a laugh. It even paid homage to my favorite Satan themed horror film, The Omen. So naturally many parishoners of the Church of the Wet Blanket hated it. For a less paranoid Christian, Good Omens was full of endless delights. Hard up for material at ScreenHub, this seemed the perfect topic for my latest article.

As someone who got the joke, I thought it might be fun to write an article detailing why Good Omens was actually a good program for those of faith. The article, which can be viewed here, was well received by my colleagues at ScreenHub, but come promotion time, all of us braced ourselves for the barrage of fundamentalist backlash we would no doubt recieve. We did the usual things like sending it to Reddit and a few movie forums. On a whim, I went to Gaiman’s official Twitter account, and sent him this tweet. 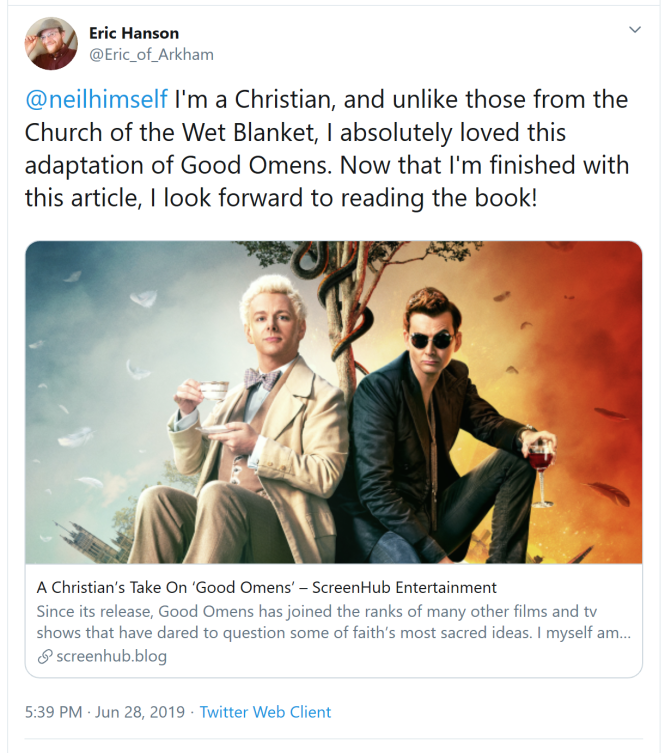 I honestly wasn’t expecting it to rise above the usual cacophony of fluff that crowds Twitter. Gaiman had no doubt suffered a barrage of angry tweets from religious nuts since the release of the show, so I expected it to get lost in the shuffle. Then something happened. Viewership on the article started going up. Quite a bit actually. I was actually nervous to look at the responses, firmly believing most would be angry accusations of heresy. Instead, it turned out my article had been read by none other than Neil Gaiman himself.

The impact this tweet had cannot be understated. Gaiman, one of the greatest authors of this era, not only read my little article, but liked and shared it. To him it would have been nothing more than a quick read and the tapping of a few keys, (or likewise for whoever handles his social media), but it sent me on a one way trip to the clouds. Though the rest of my day was spent lugging 50 pound bags of mulch in the sweltering Midwest summer, I couldn’t stop smiling.

This happened all the way back in July of 2019. So why has it taken me until October to write this? Truth is, things have been pretty busy in the months since that tweet. Some of my writing projects, a few scripts and a horror novel, had been gathering dust. Still high off the article’s success, I figured why not open them up and finish a project for once? Within a month of Gaiman’s tweet, a script I’d been working on for the last few years was finally completed. As of today, that horror novel and a second script are undergoing rigorous editing.

But there’s more. Shortly after that script was finished, anything seemed possible. After sending out a few letters, I received a job writing an article for a local paper in Toledo. It was my first experience with in-person journalism, an effort for which I was paid. It was a mere sixty dollars, but it was sixty dollars for creating something on my own. The pride was so overwhelmng, I just couldn’t part with the stub.

So, to Neil Gaiman, or whoever runs his social media account, if you ever read this, from the bottom of my heart, I want to say thank you. 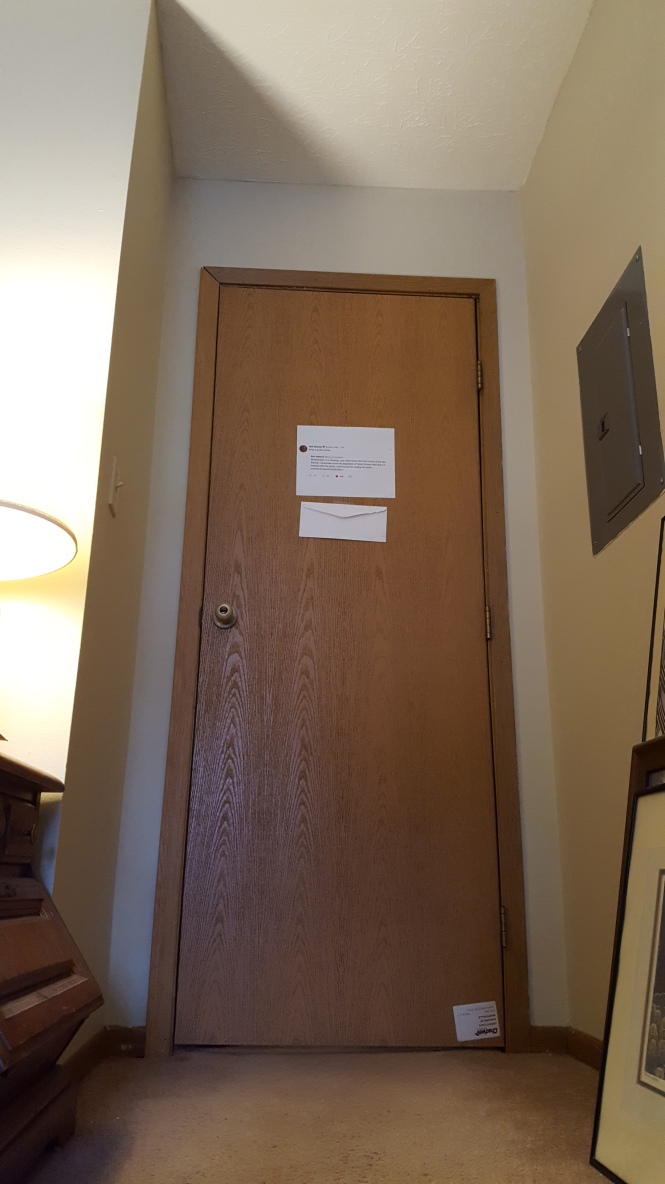 I think about your tweet often, and wonder how big an impact it had. Maybe it was the motivator for finally finishing that script some fifteen years in the making. Maybe it was the inspiration to finally reach out to a paper and land a freelance job. I don’t know. What I do know is for the first time, it made me wonder if maybe these twitchy fingers of mine had something valuable to say. That question alone was enough to help me wade through those clouds of smothering self doubt to find my keyboard waiting for me. That tweet is now enshrined on the door to my office/workspace, nestled right above the envelope containing the stub from the paper. It’s the first thing I see when I wake up, and the last thing I see as I drift off to sleep. Sometimes all it takes is a simple gesture to keep us dreaming. 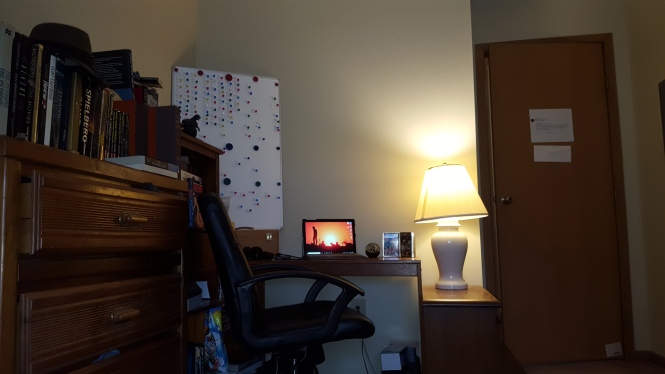 With four words, Gaiman reminded me there was still something worth dreaming for.